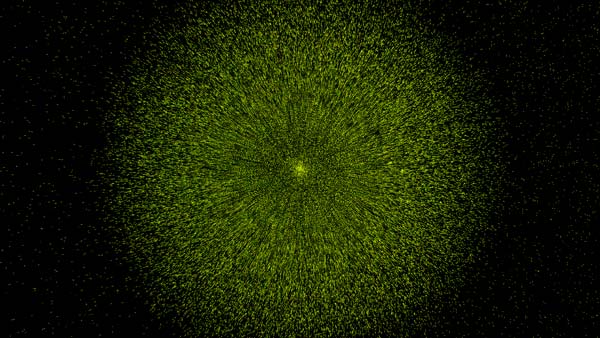 Omega Point is an audiovisual interactive installation that explores the theme of consciousness as a quantum physics phenomenon.

Recent discoveries in neuroscience support a twenty-year-old controversial theory of consciousness entitled Orch-OR that states that consciousness does not emerge from complex computational activities inside the brain, as it was previously thought, but rather it emanates from quantum vibrations inside the microtubules. These microtubules are microscopic tubular structures present inside brain neurons. According to this theory, developed by Sir Roger Penrose and Stuart Hameroff, consciousness exists as quantum information everywhere in the universe; we are merely the receivers of it rather than the creators.

Omega Point invites the participants to perceive themselves as part of a cybernetic universe of infinite quantum information feedback loops.

Marios’ work explores the effects of digital computing and communications on human perception of reality. He is particularly interested in the convergence of offline and online reality and the role of real-time processing technologies and communications into moulding these two realities into one.