Teleporter Console 2.0 is freely available as of today in the iTunes app store from
https://itunes.apple.com/us/app/teleporter-console/id858342907
for those who have iPhones, iPads or iPods.

2.0 is also available as a web experience at http://vispo.com/teleporter/webios for those who do not have Apple mobile devices.

Teleporter Console shows you random locations in 360 degree interactive, often linked panoramas. From space. From the air. From the ground. From underground in caves. From under the ocean. From Antarctica to the north pole and several places nowhere between. You’re gone. It has been reviewed widely with great enthusiasm in vice.com, fastcoexist.com, dazeddigital.com, programmableweb.com and other publications from New York to Paris to London.

Teleporter Console is my first app. I wrote it in HTML/CSS/JavaScript using the Google Maps API as a web piece and then used Phonegap to turn it into an app for iOS and Android.

2.0 has a new teleportation engine under the hood that uses binary trees and graph theory to make sure it rarely repeats itself; the piece now has greater range and duration of interestingness although even after it begins to repeat itself (which will take at least several sessions) there will nonetheless also be new places it visits among the random revisitations.

The interface of 2.0 is more responsive: you can see when you are pressing a button.

And the Share functionality in 2.0 works properly on the iPhone; if you want to share what you’re looking at, you press the Share button, copy the presented URL and send it to a friend in email or on Facebook or whatever. When they click the URL it opens the web version of Teleporter Console and shows them precisely what you’re looking at.

Here’s an essay I wrote about Teleporter Console: http://vispo.com/teleporter/ios

Version 3.0, which I’m working on now, will let you view Wikipedia articles on what you’re looking at, if they exist.

Version 4.0 will involve the creation of custom panoramas that introduce an occasional poetical twist into the experience. 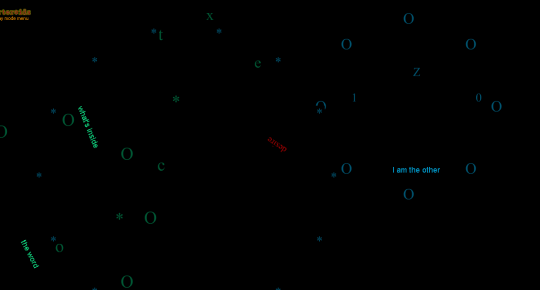