AN EXHIBITION AT THE LIGHTHOUSE, GLASGOW

Zero and one is everything – the whole universe – and equally the circle and line, which is the futura typeface, can express everything.
Hansjörg Mayer, concrete poet, typographer and graphic designer.

A work called o i l by Mayer, from 1965, made entirely of circles and lines, forms the central image for the poster for this exhibition. The exhibition will include a full display of his futura series of prints made between 1965 and 1967 which included poems made by Frieder Nake, Thomas A. Clark, Edwin Morgan and Ian Hamilton Finlay. It will also include other less well-known works from Mayer’s collections.

Context for this exhibition:

In the international concrete poetry movement of the 1950s ad 1960s the shape and sounds of poetry underwent radical transformation. Design and typography were at the centre of these developments.

A Brazilian poet, Décio Pignatari declared that the poet is a language designer.

In many parts of the world, exponents of concrete poetry (and their predecessors in lettrism and other movements) took form apart, breaking down words into letters and letters into fragments as well as into codes and signs. Many were obsessed with decomposition, with dematerialising language and exploring the properties of graphic space. Others focussed on highlighting the materiality of the text and on the space occupied by single words – such as apple or pear – making these into images and exposing their graphic form. When computer art was starting to be made, it appeared for the first time within concrete poetry contexts. Some concrete poets made works they called semiotic poems, including keys and codes.

Among the other poets featured in the exhibition are Stephen Bann who has kindly loaned some of his Amber Sand works which were first shown outdoors on the lawn of Brighton Pavilion during the Brighton Festival of Poetry which he curated in 1967. Many works will also be shown from the extensive archive of Bob Cobbing, one of the foremost figures in the concrete and sound poetry movement who was not only an important poet but who provided a vital stage for many established and emerging poets to be read and seen through the magazine Writers Forum and the bookshop Better Books which he managed.

Among the female poets included are Ilse Garnier who is an important and underrated figure who worked with breath, sound and text and Lily Greenham, a wonderful sound and visual poet whose work has been rarely heard or seen since the ‘sixties but is now at last receiving some recognition. Liliane Lijn, a U.S. born London-based visual poet (who currently has three works on show at the Beat exhibition at the Pompidou in Paris) is also included in the show with a beautiful work called Immaterial Alphabet – which will displayed in a light-box in keeping with the Lighthouse setting. A digital video of some of Lijn’s kinetic poetry will also be on display in the gallery.

The Design & the Concrete Poem exhibition is a contribution to the O-I i-O – Outside In Inside Out – Poetry Festival happening in Glasgow in early October. Works have been loaned from important personal collections in the U.K and in Germany especially for this exhibition. The exhibition also includes rarely seen catalogues, posters and experimental typography journals from a fascinating pre-digital period.

This exhibition has been supported by the Arts & Humanities Research Council Digital Transformations Theme Research Fellow.

A Talk about Ian Hamilton Finlay and Design & the Concrete Poem will be held at The Lighthouse on Saturday 1st October from 3:00-4.15 pm with Professor Stephen Bann and Dr Greg Thomas, chaired by Bronac Ferran, This event is free and open to the public.

Earlier in the day is an invite only roundtable exploring Care for the Concrete Future – how might digital humanities methodologies help sustain and conserve distributed collections of concrete and visual poetry for future researchers to access? 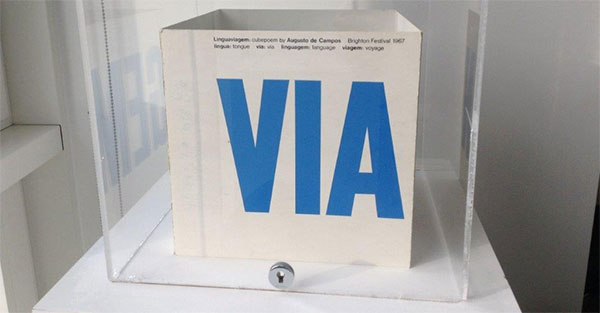